Easter Around the World by Sophia B (6th) 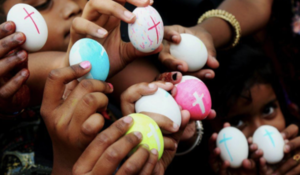 From the ends of the earth, to new beginnings… Life is good. Alleluia! We are in the Easter season and celebrating the miracle of our faith!

Easter is a faithful international celebration, where we remember the death of Jesus Christ, as well as his infinite love for us. We set aside several days of Holy Week to recall Jesus’ suffering, Death, and Resurrection. This includes Holy Thursday, Good Friday, and Holy Saturday, which make up the Easter Triduum (or Paschal Triduum). During Holy Thursday, we look back on Christ’s Last Supper, as well as the story of Jesus washing the feet of his disciples, to commemorate his love for us. During Good Friday, Jesus gave his life for us, which reminds us of his passion and magnificent guidance in our lives. And finally, on Holy Saturday, we prepare to celebrate our Lord’s Resurrection, or triumph over death. Jesus Christ is such a significant influence in our lives, that Easter will never be forgotten, but always celebrated as we honor God’s love for us through Jesus Christ.

Easter is celebrated worldwide, and each celebration is unique and different from our version of Easter Bunnies, colorful eggs, and candy. Each cultural tradition has its own meaning, and joyous, yet faithful ways of displaying it. You will learn about how different countries diversely celebrate Easter, yet still embrace the faithful meaning it has in our hearts.

Even though you are most likely familiar with the American way of celebrating Easter, you may not know where the traditions originated and derived from. Historians believe that Easter was adopted from a Pagan Festival celebrating Eostre, the goddess of spring and fertility. And Eostre was very close to rabbits and bunnies (because they are also strongly associated with fertility and life), which is said to be the inspiration for our modern-day Easter Bunny. Historians believe this new form of celebrating Easter originated in Europe in the 17th Century, and was brought to America by German immigrants. Since eggs were banned during Lent, it was a good treat to eat them on Easter. Eggs symbolize fertility and renewal, and they became good gifts to give during Easter. It derived from late 19th century Russia, when members of royal families gave each other jewelry-encrusted eggs, and so, it became popular in modern customs to show our respect towards people.

While you walk along the stone Czech Republic’s walkways you notice figures dressed in black robes, and white unidentifiable masks [to represent the Easter Mystery], marching along the streets, playing rattling wooden instruments to call people to mass. While young men playfully pat young women with willow branches along the city sidewalks (this is also known as Pomlázka). The rustic willow branches are decorated with colorful ribbons at the end. The tradition is said to transfer the willow’s life and fertility to women.

You gaze in amazement at the hand-made intricately designed “carpets of sand” in Antigua, Guatemala. People dye sand an assortment of vibrant colors, and sprinkle them in complex patterns, sometimes using stencils. Later, priests parade on this astonishing display, while leading the Easter Mass. Also known as Semana Santa, the solemn celebration has hundreds of spectators, joyously participating in religious rituals and processions.

You walk along Jerusalem on what is believed to be the path Jesus walked before his crucifixion (also known as Via Dolorosa). You pass 14 stations along the way, each symbolizing the Stations of the Cross. With tremendous crowds in front and behind you, pilgrims proudly march along Jesus’ footsteps. On Holy Saturday, thousands await the Ceremony of the Holy Fire, that includes the lighting of the Patriarch’s candle from within the tomb. While on Palm Sunday, people visit the Mount of Olives (an ancient Jewish burial location off which Jesus ascended to heaven). There, they sing hymns, reenact Jesus’ entrance into Jerusalem, and honor Christ’s love for us.

You walk along the streets of Hungary, and glimpse men dousing women in water and joy. This is believed to have a cleaning, healing, and a fertility-inducing effect. Known in Hungary as An Easter Sprinkling, this is also celebrated in Poland and in various parts of the Philippines. Women are not always soaked in water, but sometimes perfume. This blissful drenching-activity is also known as Locsolkodás, and brings many smiles to people’s faces.

If you’re walking along the streets of a Greek island called Corfu during Easter, you should really watch out for flying clay pots. There, people throw immense clay pots out of their windows, as thrilled audiences cheer to the resounding sound of clay pots cracking against the stone streets into thousands of shards, and echoing in narrow passageways. The tradition is done to welcome Spring, and to practice the idea that new crops should be harvested with new and clean pots.

You settle down for an Easter feast in your warm home, but the doorbell rings abruptly. Outside on the streets of Sweden, kids dressed as witches await sweet candy. What is known as Halloween in America, is known as an Easter version of trick-or-treating in Sweden and Finland. Children dressed as witches roam the streets, visiting houses in search of sweets. But it’s not that easy: they have to earn their candy by presenting paintings or drawings. Before consuming a traditional Smorgasbord meal in Sweden, people thoroughly clean their houses, and stock their fireplaces with aromatic wood chunks, to fill the household with warmth and joy.


In Mexico, people construct a replica of Judah, hang it, and finally burn it to mark revenge for him betraying Jesus. Men in dark robes carry heavy bundles of thorny branches, as well as sacred crosses. Women in dark robes walk barefoot, dragging chains behind them. And people dressed as skeletons perform the traditional “dansa de la mort” or “death dance” in Spain, in order to reenact scenes from the Passion. The processions end with skeletons carrying boxes of ashes, and booming fireworks lighting up the sky.

You parade the rural streets of Italy, among thousands of other people, eager to follow a majestic caravan, that is strolling around up front. Immensely large amounts of people follow a beautiful caravan, as it guides them through the city, just as Jesus Christ guided us in our lives. As the path comes to an end, the caravan erupts in glorious fireworks, that plummet towards the sky, and explode in a dozen different directions in dazzling colors. The display fills the city with awe, smiles, and joy.

You squeeze through the crowd engulfing a big pan and many chefs, that make a massive omelette to please the audience. This is known as the Brotherhood of the Giant Omelette, and has been going on for decades in Bessières, France. More than 15,000 eggs are incorporated into this creation, and at the end of the ceremony, portions of the omelette are distributed to thousands of observers who watch the festivity.

Since my family is Russian, we tend to stick to Russian traditions of celebrating Easter. We don’t celebrate Easter during early April, but instead, following the Orthodox days through the Gregorian calendar, we celebrate it on a Sunday that lies between late April and early May (according to this, this year’s Easter will be May 2nd). The Saturday before the Orthodox Easter, we go to church in the evening, where a priest blesses our food with holy water. Sometimes, we attend a late-night mass during which we participate in a procession (a religious walk around the church carrying the cross). We start our Easter day with a traditional Easter breakfast which includes kulich (a Russian sweet bread), paskha (a Russian dome of soft and sweet cheese curds often including raisins and other add-ons), and colored eggs. Sometimes, we artificially dye our eggs, and sometimes we color our eggs naturally, using onion skin. Instead of taking off the shell and enjoying the hard-boiled eggs that way, we have an “Egg Tournament”. Basically, two people take one egg each, and one person hits his egg against his opponent’s egg. Whoever’s egg cracks, loses, and the winner challenges the winner of another round. Although you don’t always win, you get to enjoy your hard-boiled egg no matter what. We enjoy this food throughout the day, but the most exciting time to eat it is always in the morning. Sometimes we participate in egg hunts that involve elaborate riddles, and more.


Now you know the Easter celebrations look like around the world, bringing people religious significance, everlasting joy, and the honoring of God through Christ in our lives.